Have you taken a DNA test and wondered if your results were wrong?

Do you match people you have no idea who they are?  Have you asked your Mom about names that have come up in your results and had her say that “DNA is junk science” or “those tests are wrong”?

DNAngels recently worked on a case  where, according to every logical explanation, the results were WRONG.  Let’s take a look at this case and see what happened with the results.

​ When Leesha Calderon of New Braunfels, Texas, took an Ancestry DNA test, she never expected that she would be a person that got “strange” results.   She knew her mom and dad. The only family mystery was her paternal grandfather was adopted so she knew there was a possibility of some unknown distant matches.  But there it was on her computer screen,  a Parent/Child match with a man she had never heard of and who lived several hundred miles away.

Over in Lawrence, Kansas, photographer Eric Murphy was just as confused.  He had one child, a 22 year-old son.  He didn’t recognize any of his matches but Eric’s maternal grandmother was an adoptee.

Leesha’s  initial reaction was to reach out to him. She messaged him and he was just as confused as she was.  He was around the same age as her Father, but had not lived in California at the time of Leesha’s conception and birth. He swore he never knew her Mother.  Leesha’s Mother and Father were equally perplexed. They denied any funny business with her Paternity and claimed her Father was her biological Father.

Confused, Leesha reached out to DNAngels through email.  Kelly Grace Hickey answered the email and was sure it was just another incidence of “Mom’s not telling the truth”. Kelly Grace answered  Leesha and they began chatting.  She soon realized that there was something “odd” about the case that she couldn’t quite put her finger on and called in her favorite search partner and Founder of DNAngels, Laura Olmsted.  Together they looked at Leesha’s matches.

Leesha’s grandfather and Eric’s grandmother left gaps in their family trees. And both adoptees happened to have come from the same area in Canada. But Eric matched Leesha at too high of centimorgans for that to be the sole explanation.

Stranger still, Leesha matched paternal Aunt Trena at the correct cM levels.  Aunt Trena matched but her results showed Eric was around a first-cousin match to her.  How could she match her Father’s sister if this other man was her dad? None of the data they had made any sense.

It bothered Laura so much she stayed up all night sorting Leesha’s matches and found something even stranger.  Eric matched every single person in Leesha’s tree, there were matches that tied Eric to every one of her grandparent’s family.  He matched both Leesha’s maternal and paternal side!  From Laura’s experience, that only happens in a few circumstances:  a full sibling, double cousins, or a child/grandchild of the client.  Laura realized all the numbers were showing as if Eric was Leesha’s child and the numbers started making sense.  Aunt Trena was shown as Eric’s Great Aunt, not first cousin.  At this point Laura pulled in Ramona Folmar, another Angel and Genetic Genealogist who often helps on cases with double cousins and endogamy.  The research teams work with FaceBook Messenger and create group chats so there is a log of information.  Leesha’s “research room” now contained Leesha, Trena, Kelly Grace, Laura and Ramona all trying desperately to understand the puzzle in front of them.

​Laura and Kelly Grace went back to Leesha with questions.  Did she have children?  How old were they?  Have any of them been tested? The answers came back that she had 2 children. They were 8 and 4, neither had been tested.  The Angels were convinced that someone was attempting a bad joke on Leesha. Laura, with Leesha’s permission, called Eric to do some investigating. Aunt Trena volunteered her DNA for comparison as well.  Laura found Eric to be immediately friendly and helpful. He was wanting to get down to the bottom of the situation as well and figure out who this “mystery child” of his was.

Ancestry has never had a “mix-up” with DNA but was it possible that this was the first one?  Could it be that one of the Calderon children’s DNA was sent in and labeled as Eric’s?  Who sent it in and why?

While Laura and Eric were discussing the case, they went down a list of possibilities and Eric mentioned that 4 years ago, he was diagnosed with Lymphoma and had a stem-cell transplant.  Alarm bells went off in Laura’s head and she went back to Ramona for confirmation of her suspicion.  Ramona confirmed that a stem-cell transplant would change Eric’s DNA. There are a few documented cases of a stem cell transplant changing not just blood cells but also saliva and other bodily fluids. Chemotherapy kills a patient’s bone marrow cells and the new stem cells regrow. The person is a fusion of his original DNA and the donors.  When a person has two sets of different DNA, they are a genetic chimera. Eric admitted he never thought of that when he took the DNA test and stated that he recognized none of the matches that were generated by Ancestry.com.   Normally Ancestry.com’s computer would have caught this anomaly and rejected Eric’s sample as contaminated if it had two people’s DNA. But his sample was just the donor’s DNA and none of his own.  Now the question to be answered was did the stem cells come from Leesha’s child?

Laura hurriedly made a call through FaceBook Messenger to the group assembled and asked Leesha if she had donated her cord blood from either of her pregnancies.  Leesha did indeed donate her first child’s cord blood eight years ago.  Laura explained that Eric had had two stem-cell transplants.  The first using his own and the second using cord blood from two donors, and it became obvious that the donor for the second transplant was Leesha’s daughter, 8 year-old Mia Moore Calderon, whose name is a play on the Italian “Mi Amore” or “My Love”.  Tears flowed openly from all the women on the call.  It was because of Mia’s stem cells that Eric was alive today.  Mia herself understood the gravity of the situation when explained to her and was simply awed by the fact that she had saved this man’s life.​

Eric’s Dna test made him appear as Mia’s identical twin.

Leesha and Eric keep in touch via FaceBook.  Tentative plans have been made for the two families to meet at some point in the future.  Leesha’s Mom and Dad are relieved that the mystery has been explained. Leesha’s Dad was her biological dad and he gained a biological granddaughter in the form of a man his own age. 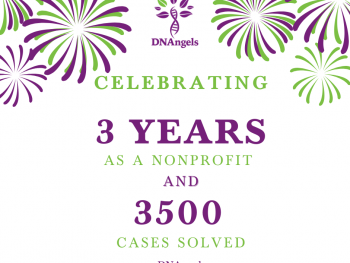