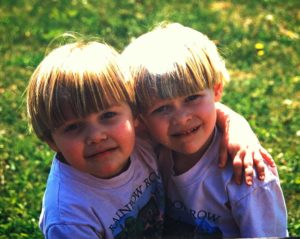 kole grew up in a by-choice single parent home with her mom, Ann who had more than enough love for Nickole and her sister. Ann had always wanted children but was aging quickly and made the informed decision to have children via sperm donor. Ann had the support of her loved ones while she took the steps in becoming a mom. She dreamed of the child she would have while looking at the donor profiles. What color eyes or hair will they have? What kind of personality? Would they love sports? Would they excel at math or science? Ann knew she wanted a donor that had been used before with a successful pregnancy.  After looking at countless profiles, Ann chose a donor she thought would be perfect. He was well educated with a degree in Molecular Genetics, strawberry blonde hair, and blue eyes. An appointment was made and had the insemination process began. Nine months later, not one but two beautiful and healthy baby girls were born. Ann named her precious miracles Nickole and Tess.

“She never kept how they were conceived a secret”

Ann was the main support system for Nickole and Tess. Ann was an amazing, strong, and passionate woman. She was well educated, an art teacher, and an early intervention specialist for children with special needs for many years. She loved her family dearly and would do anything for anyone. Ann was a caregiver for years to her ailing grandmother who had cancer twice before her passing. She would help her children in any way she could and support them in whatever life brought them. Ann raised her girls with an open and honest relationship. She never kept how they were conceived a secret. They always wondered about who their biological father was but all they had those little snippets of who he was via the donor profile information.

In early 2008, they saw an episode of the Oprah show where the topic was about donor siblings connecting along with the donor via the Donor Sibling Registry (DSR). This registry was created in 2000 by a mother and donor conceived son duo, Wendy and Ryan Kramer with the goal of connecting donor siblings along with support for the siblings and advocating for the rights of the donor conceived. They knew other donor conceived children were just as curious as Ryan was about not knowing the paternal side of family line. They created DSR through Yahoo as a group and it grew from there to become a nonprofit charity with over 70,000 members with more than 20,000 connections made.

With this new information, they had a new avenue to begin a search for more siblings. They knew there were 2 siblings born before Nickole and Tess. The search began with Ann at the helm by creating a profile on the DSR. Nickole, Tess, and Ann were waiting for what seemed like forever for a match when about a year later, it finally came. That match was a half-sister who was conceived using a different donor clinic than the one Ann used to conceive Nickole and Tess.  The mother of the half-sister shared a packet with them that had her biological father’s donor profile number & personal information such as he had 1 brother, blonde wavy hair, blue eyes, fair complexion, 8 years of college and Molecular Genetics, into different hobbies, not athletic, no children, and said he has a dry sense of humor. This was a match to Ann’s chosen donor profile. 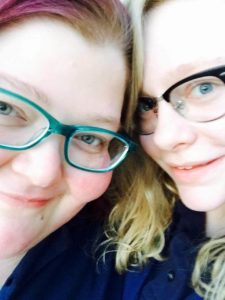 Over the next decade, Nickole kept searching off and on but always came up empty-handed. The summer of 2019, Ann passed away after a long illness. This life altering event renewed the curiosity of learning her ancestry and maybe connecting with more siblings or identifying her father, so she decided to take an autosomal Ancestry DNA test in early 2020. She waited for a few weeks for the results to come in with Tess just as excited as she was. She went on with her life with the thought of the results crossing her mind several times a day. Finally, the email came alerting her that her results were ready to be viewed. She got on Ancestry.com, clicked DNA, then on DNA Matches, and the screen displayed a list of names of people who are genetically related to her. She had another half-sister match, Leanne but she was unaware of being donor conceived and was a little confused. She had several cousins that she connected with but did not know enough about genetic genealogy to put the puzzle pieces together. Her DNA Story which is a report showing her ethnicity estimate listed England & Northwestern Europe, Germanic Europe, Ireland, Wales, Norway, and Scotland.

A new half-brother match showed up and Nickole sent a message excited to connect with another sibling. He never responded which made her incredibly sad, but she did have a message from Leanne! Leanne had confronted her parents who told her she was in fact donor conceived and knew she and Nickole were half-sisters. Nickole, Tess, and Leanne have grown quite close bonding as newly found siblings and their shared unique circumstances.

“While scrolling on TikTok, a video by Cat McDonald caught Nickole’s attention…”

Days later while scrolling on TikTok, a video by Cat McDonald caught Nickole’s attention that mentioned the DNAngels. It was a video talking about her journey of finding out she was an NPE after taking and Ancestry DNA test and how DNAngels helped her. Nickole found the website for DNAngels and kept going back and forth for days if she should contact them for help. She didn’t know if she really wanted to know, is it fair to our donor to open this can of worms, what would they find or not find? She just didn’t know what to do and weighed the potential consequences.

Finally, she mustered the courage and sent a request to DNAngels. On January 28, 2021, a screener contacted her and asked her some questions about her story and the DNA matches. Within a few minutes, she was accepted as a client. This was a first-time experience working with a genealogist for Nickole and invited Tess for support and this was her story too. This was happening so fast, and they both were excited yet did not want to get their hopes up. They began this search with their mother over a decade ago and not much has been found other than a few siblings.

Nickole was assigned an angel on January 30 named Laura who quickly dove right in that same night. There were previous conversations exchanged between Nickole and some of her DNA matches which gave Laura breadcrumbs to follow to build a paternal tree. She quickly discovered ties to Kentucky with exceptionally large families, but she knew she needed a family with only 2 sons based on the donor profile. Laura added Tara to the team to assist her in solving this case. At this point they identified some common surnames that they needed to link together.

“Laura and Tara’s persistence paid off”

Laura and Tara kept on going even though it was late, and their persistence paid off. They discovered dad’s name!! Nickole and Tess were floored at the news. They had been searching for years… more than a decade! It is no longer a mystery.  Tara sent a link which included a name, Eric. It had a photo of him with wavy strawberry blonde hair and bright blue eyes behind his glasses wearing a red tie. It listed the universities he attended and his peer reviewed publications. Then a Facebook page link followed which had a cute kitten as a profile photo. His profile listed that he was from Kentucky and studied Molecular Genetics among other things in the intro section. Soon they were looking at a high school photo of him comparing with his professional photo as an adult. He matched up perfectly to the donor profile.

Many emotions surrounded Nickole and Tess. A scary thought appeared of “what if he doesn’t want to meet us or doesn’t want to be involved?” A wave of unsettling feelings paused Nickole’s heart, but she found the courage to continue. Ann had started this journey, and Nickole was going to see it through to the end no matter what happens. Laura and Tara kept sending things… first their grandmother’s obituary which included a photo. Their maternal and paternal grandmothers shared the same name! Nickole and Tess were curious about the grandfather and soon his obituary was located which also included a photo.

Once Eric was found, a message was sent on Facebook. They all waited impatiently for him to reply. When one did not come, the team scoured public records searching for other contact information. Nickole was worried that he saw it and was ignoring them or if he was just in shock trying to process it all before replying. Tess was thankful for being able to know who her donor father was and Nickole lightened the mood with being happy with knowing where her nose came from. Both sisters did not really expect much to come besides knowing their paternal family tree and a few photos of family.

“Honey, there is a lady on the phone who wants to talk to you about your children.”

On February 01, Laura decided to start calling the phone numbers she had found for Eric. His wife, Victoria answered the phone as Eric was walking in the front door. Victoria knew all along that Eric had been a sperm donor and even encourage him to do so. She was ecstatic that Eric’s children had found them. When Eric came in, Victoria had told him “Honey, there is a lady on the phone who wants to talk to you about your children”.  They were genuinely pleased to receive this call.  Laura gave them contact information for Nickole and Tess.

Once Nickole spoke to Eric, all her hesitations and fears were melted away. He was so welcoming and had a great sense of humor. He made a Star Wars joke and told her “I am your father”. Victoria was laughing in the background. Nickole told him about her having his nose and he laughed and said, “You poor child”. She learned that he knew of 3 children from stalking the DSR website but felt it was best not to connect with them out of respect for his mom who wouldn’t understand. He talked about his family, exchanged photos online, and Nickole talked about her and Tess growing up with Ann.

Eric, Nickole, and Tess have continued their relationship with calls and video chats. They are learning more and more about each other. New siblings are still popping up on ancestry and in total, there are 6 half-siblings. Eric’s selfless choice made these families possible, and they are all forever grateful toward him for that. Ann would have been so thankful for him playing a role in her becoming a mother and that he and Victoria were so kind toward her girls. Nickole and Tess plan to meet Eric and Victoria as soon as it is safe to do so but for now, they are content as they navigate this new relationship.

Volunteer Of The Month – July 2021
Next Post: When DNA Results Are Wrong!