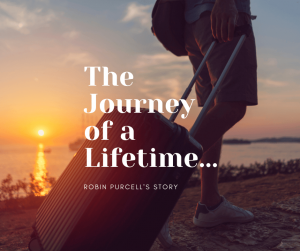 The Journey of a Lifetime

Robin Purcell has always been attracted to tales of adventure – especially upon the high seas. Reading was his escape from the abuse of his foster mother, for in books he could slip into another world. His favorite naval adventure story being Edward Everett Hale’s “The Man Without a Country”. It is part of what inspired him to drop out of high school and join the Navy, where he served for 4 years, seeing the world, and living his own adventure story.

However, Robin’s adventures started much earlier, he just doesn’t remember them because he was quite small at the time.  Robin was born in Pennsylvania in the 1950s. He believes he was given up by his biological mother – twice! – because he is of mixed ethnicity; his mother was white and his father was black. She realized that he would never be able to “pass”, and in 1950s Pennsylvania, interracial relationships were still taboo. He first went to live at an orphanage, but he was not there for very long. When Robin Purcell was 2 or 3 years old, the orphanage sheltering him closed, and he was given back to his biological mother, who then sent him to his birth father to raise. He and his sister got into a cab, and a neighbor acting as a go-between was to deliver him to “dad”, but somehow on this journey, he ended up in a household with a woman was physically and verbally abusive to him and said unkind things about his mother. Despite her unkindness to him, he taught her how to read so she could enjoy the newspaper.

He always believed his name was “Robin Purcell” and reconnected with the woman listed on his birth certificate and they formed a relationship. He tracked down the man she said was his father, and he genuinely believed he belonged to these families. He looked at them and saw similarities, “they were good looking” he quips, and so is he. He comes across quiet when you first meet him, but becomes very animated when talking about his passions, and he has many passions. He is a voracious reader, and he is very creative. His mediums are photography, videography and music; he plays guitar.

He is also extremely intelligent; he completed his GED after boot camp and after his tour in the Navy, got his Bachelor’s Degree in Administration of Justice from Penn State. He went on to get two Master’s Degrees and taught for many years before “retiring” and going to work for the Department of Family and Children Services. He has a passion for knowledge and sharing it with others. He created a courtroom for teaching the criminal justice system to students and created a teen court where students committing infractions were tried by a jury of their peers.

He is inquisitive; he participated in the Human Genome project in 2010 and in 2019, he decided to take an Ancestry DNA test to find what his ethnicity breakdown was, and it turned his world upside down. This is where he first got the inkling that he might not be Robin Purcell.

He is a family-oriented person with three children; a son and two daughters. The daughters being 29 years apart! He is an avid RV’er. He bought and remodeled an older RV, which is “cool” now but at first glance looked like it was “for old people” according to his 12-year-old daughter.

But for all of these things he is, he is not Robin Purcell, even thought that is the name on his birth certificate. And the woman he tracked down and thought was his biological mother, and the people he thought were his biological father’s family, are not. The birth certificate he has belongs to another man – born Robin Purcell and adopted in 1963 and now living in New Jersey under the name his adoptive parents gave him; but that man is not our Robin. Our Robin was never adopted by his foster mother.

After doing Ancestry, he was able to trace his maternal side to his biological mother, Grace. He reunited with his maternal siblings – 5 sisters and two brothers. His youngest sister remembered his biological father and described him as a musician, but that was all he had to go on. According to his biological siblings, he was known as “Joey” when he was born. His oldest sister remembers his birth and holding him in the hospital, another older sister was the one who was to escort him to his “biological father” when Robin got into that cab so long ago, embarking on his first adventure.

With the help of DNAngels, he was able to connect his DNA to the Cash family. He reached out to his suspected Aunt, and she tested. Once her results came back and she matched as an aunt, he realized it was one of her older brothers – the likely one being Clarence, the oldest who was a musician! He’s made contact with one of his two half siblings, and they met when she came to California last year, but she has declined to test for personal reasons. He feels sure that he has found the right father though.

The things that struck me most about Robin is his gentleness. He attributes his demeanor to his life-long friend and mentor, William Weaver, a Mennonite Minister he met as a youth. He credits William with showing him there was another way other than giving in to anger. William was a surrogate father, a role model and someone he could have frank, honest discussions with. When William passed a few years ago, “Bobby” as he was known to the Weaver family flew home to pay his respects.

When asked what wisdom he would pass on to others still on their journeys he said, “Don’t give up – there will be times when it seems like you’ve come to a dead end, keep plugging ahead and learn to be patient. Your truth will come out sooner or later. Mine took a lifetime, but it was a journey worth taking.”

Musings Of An Angel – Volume 14
Next Post: Fishing For Family