This week, I had a front row seat to watch a young woman reunite with her biologicalus paternus.  She was adopted at birth and oddly enough was still living around twenty miles away from both biological parents.  As of this writing, she has not connected with her mother, but has with her father and his response was to be open and welcoming and completely excited that she has found him.   He knew her mother was pregnant with her, and that she was given up for adoption.  He says it “never sat well” with him.

This is the kind of Father I hope all clients find.   It does not happen, of course.  Some men welcome new-found children with open arms.  Some deny like Bill Clinton, “I did not have sex with that woman.”  No matter that DNA says otherwise, they still cannot bring themselves to admit – whether because of shame, because of fear of destroying a relationship where they cheated on a wife or girlfriend, or just because they are a giant turd.    I get it.  When I realized that my biological Father had been married 20 years at the time of my conception, was still married at the time of my discovery, and to the same woman for now over 60 years, it was hard for me to accept that my presence could cause him some marital discord.  I did not cause him to cheat, I am merely the product of his indiscretion.  Still, I did not want to bring any grief to his life, and it took me a long time before I reached out to him.  I got no response, but I was not expecting one.

I often say we cheer for our clients when they have a successful reunion with a biological parent, and we grieve for them when they do not.  I would say that a good portion of the biological fathers do not know that they had a child.  Whereas a woman has no doubt in her mind that she has a child out there that she has given up for adoption.  Many of these men feel cheated of missing so much of their child’s life.  Then there are the cases where Dad has passed and client is the ONLY child and the rest of the family, although welcoming, cannot make up for the missing father and the child hears “He always wanted a child”, or “He would have loved you”, or “you are exactly like him”.    I grieve for these clients the most.    I had a client a while ago where Dad was deceased, aunts and uncles all deceased, most did not marry or did not have children, and the one brother I found also died, tragically and heroically, but young.  Luckily, she found an obituary that listed another brother.    It was some solace to my mind that there was at least one living person out there she could contact.

A recent conversation with the other Angels about this topic gave me some food for thought.  I asked if found Mothers or Fathers were more welcoming in their experience.  Some said Mothers, others said Fathers.  The raw statistics show that we have more clients looking for Fathers than Mothers.   When contacted, some fathers think it is a scam.  In my own experience, one of the first people I talked to about my NPE experience said that Ancestry matched me with someone at random because they had my digital footprint.  My first thought was “ok, I can see that if that matched me to a guy in Saudi Arabia, but this guy is IN MY HOMETOWN and besides who has the time to sit there and research a person as boring as ME and make this crap up?”   I’m nobody, who are you?  Are you a nobody too?

Some men have wives who get, as it was eloquently put during the discussion,  “their panties in a wad” about a relationship with a child who occurred before they were around.  All of the Angels said a child that was conceived prior to their relationship would be welcomed with open arms.  However, most of the Angels when posed with finding out (even after 40 years) that their husband had cheated at had a child during the relationship that they would in fact leave him, unless “I was too sick to take care of myself”.  I work with some mercenary ladies!  Kudos to my Angel sister Heidi for saying she would accept a child such as myself.  But it gave me pause.  Everyone knows that my own contact with my bio-Father’s family has been limited to one sister and I burned that bridge by sending a Fed Ex to dear old Dad with a letter and photos last March.  He never replied.  I’ve been asked “How do you know he got it?”  I know.  I also know he is ninety now and that even though it was a very long time ago, his wife would not forgive him.  How can I expect her to when the Angels I work with would not?

The contact I long for is not his.  No, it is the siblings and the REAL BROTHER I have out there.  As a child, I always wanted a big family.  Oh, I have a maternal sister, and I love her dearly.  And I have dozens upon dozens of cousins, but none of them really close to me in age.  I was the youngest of one generation and too far away from the cousins that were close in age.  Granted my new half siblings range from 9-19 years older than me.  The youngest being that brother I covet, and the sister whose RBF I have.  I have seen photos.  Some given freely by the half-sister before I immolated that bridge and some I have gotten in other ways.

I started this installment to try and make a post akin to my “bad mommies” rant of a few weeks ago.  In my to-do list it is called Halo 9 “Bad Daddies”.  We’ve had our share, I guess.   None of them seem to sting as badly as the narcissistic mothers we have had.  Some take a while to come around; some never quite do.  I live vicariously through the clients that find Fathers and make connections with siblings.  It thrills me to no end to see their photos.  One young man and I recently had a bet on what his father looked like.  A few days later he got the photos of his Father, and I was delighted to see I nailed the glasses and missed on the hair.  I do not know if the client has noticed that he and his father have the same charming, lopsided grin.  I’m sure Dad was stunned by the revelation he had a son, even more stunned when photos were exchanged, and it was like looking in a mirror.

Another client reached out recently to ask what he should give his new-found Father for their first Christmas.  This story also touches me as the Father in question is now a preacher (complete with hair) and I was worried that his position would cause him to deny his son because it would show that he was less than perfect.  However, I am delighted to report that I was wrong.  Dad came clean, admitted the relationship with client’s Mother and he, his wife, and two children, have welcomed the client with open arms.  People like this man restore my faith in humanity.

It is moments like these that I treasure and help remind me when my own burden becomes almost too much to bear why I do what I do.  I volunteer to reunite families.

In Case You Missed It  – Read Volume 8 here

Musings of An Angel – Volume 8
Next Post: Volunteer of the Month – December 2021 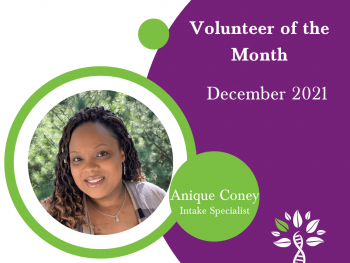