Today’s installment is brought to you by the letter Y and dedicated to narcissistic mothers everywhere: you caused this mess; it would be nice if you fixed it instead of your child having to come to me for answers you should be willing to provide.

A young client said to me this week that they wished their life had value to their mother.  That gave me pause.  I hear a lot of stories.  I hold a lot of hands.  Here was this beautiful and fragile creature telling me that they felt their life meant absolutely nothing to the person who gave it to them.  A conversation with another client this same week revealed that this client had zero contact with their mother.  Which really annoyed me on more than one level.  I had not been able to find our biologicalus paternus for this case.  I had three candidates for Grandma and four for Grandpa.  The two major paternal lines both went to the women.  The top matches for the men were in … NEW ZEALAND.  What fresh hell is this?  I now have seven sons of three women who all appear to have never been outside of Pennsylvania, much less have relatives in Southern Hemisphere. For this client the journey “just got real” as I have given the client the contact information for the men I believe they need to reach out to first.  They going to have to test one child or grandchild of each woman.

In frustration, I said to the second client that it would make things much easier if mom would just ‘fess up.  Of course, if all of the mothers out there who said that direct-to-consumer DNA tests were the devil (yes, this was said by a client’s mother and relayed to me this week) were more honest about their shenanigans, we would have a lot less clients to assist.

PSYCHOLOGY – selfishness, involving a sense of entitlement, a lack of empathy, and a need for admiration, as characterizing a personality type.

Did you commit an indiscretion years ago, either accidentally or intentionally and become pregnant?  Have you lied to your family regarding the paternity of a child?  When confronted with the truth, have you blamed the victim, i.e., your own child? Still denied the truth as “junk science”?  Refused to give honest answers to a child who is hurting and searching for the truth because your skewed truth means more to you than making sure you own child has a whole and healthy psyche?  You, my dear woman, just might be a narcissist.

I have said to clients that we hear about narcissistic mothers quite often.  We empathize with them because we know what they are going through, it’s as though they are holding up a mirror and we are watching ourselves in those first raw weeks after discovery.  The acceptance the support group brings can be cold comfort compared to what we feel we have lost.

I struggled a long time with what to say to my first client.  I wanted them to know that their life had meaning; and the problem was not inherit in them, but some damage in their mother.  I often wonder if the behavior we call “narcissistic” in these women is a defense mechanism.  Surely, they never thought this secret would come to light.  How would I react in the same situation?  Is protecting the secret and saving face worth the damage to the sacred relationship between mother and child?

This is not to say that ALL mothers of NPE children are narcissists.  I have worked with a good number of clients over the years that the mothers were helpful and several times with the mother herself.  I always use kid gloves with these women because I cannot imagine how humbling the experience must be for them.  I do not judge them.  I do not judge my own mother.  I am pretty sure I have sussed her reasons for why she did what she did – but that story is for another day, maybe.

Volunteer of the Month – October 2021
Next Post: Musings of An Angel – Volume 7 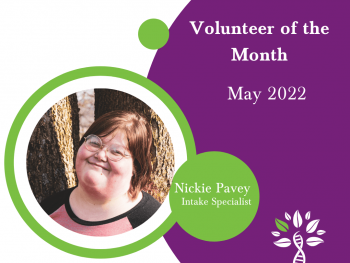